Alun Reese
Arturus Kane had offered to stay with Alun until someone from his family arrived, but Alun had refused. He wanted to be alone with his kids, to figure out how he was going to explain that their mother was gone. In hindsight, maybe it would have been easier to wait for Tegan to arrive. Then again, she was currently apparate-hopping from the other side of the world. It was going to take a while.

His baby monitor mirror was still sitting on the table next to him. He had sent Iwan to bed, against the boy's wishes, but as far as he knew, Nerys was still outside. Nerys. She was so close to her mother, what was he going to say to her? It was all too much. His face was still streaked with tears despite his best efforts to keep a brave face.

As he glanced up from where he was sitting on the armchair, he caught sight of a family photo sitting on the mantle. His wife looked so happy and carefree, tossing her hair over her shoulder every so often and flashing her trademark crooked smile. Beside her, photo-him had his arm wrapped around her waist and was currently kissing photo-her's cheek. The older kids were standing in front, looking like the last thing they wanted to be doing was holding hands, while the baby squirmed in his wife's arms. The image of a perfect family. And now it was broken. He choked back another sob, freezing as he heard footsteps.
Player Profile
This season, I've RP'ed with: ... you? Send me a pm or a discord message to plot! 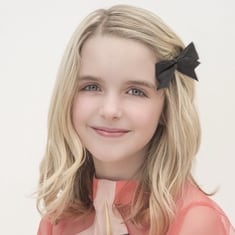 Nerys Reese
Nerys had been outside when the man in the Azkaban robes arrived at their home. She had felt uneasy all day, thinking that maybe she was getting sick. Being sick was alright, because her mother always made her soup tea and gave her fizzy drinks, and let her be warm and snuggly on the couch all day. Honestly, she couldn't wait to be sick once her mother came home.

She was late, and the man in the Azkaban robes had gone to talk to her father. Why were her insides turning? Was she about to be sick right there in the garden? She thought that maybe she was so she went inside to find her father. Iwan was nowhere to be found, though she was pretty sure he'd gone inside too. Her father was sitting in a chair and he looked miserable. Maybe he was sick too. Quietly, she stepped up and stood in front of him. "Papa?" he questioned, tilting her head so that her blonde hair fell to the side.
VKP
Write with me!!

#21644  by TyrellRose
23 Jan 2019, 13:33
His head rose at the small voice, and Alun took in the tiny figure in front of him. She looked so much like her mother. He couldn't believe how similar they looked, right down to the shape of her chin. He had to put on a brave face, though. He couldn't let her see him cry. Breathing in deeply, he extended his hands to her.

"Yes, pumpkin?" he asked, gesturing for her to come closer, so he could pull her up into his lap. Maybe he could do this. Maybe he could pretend everything was alright. "How are you feeling? I know you weren't feeling the greatest earlier," he added, trying for the distraction approach.
Player Profile
This season, I've RP'ed with: ... you? Send me a pm or a discord message to plot!

#21685  by Peyton
24 Jan 2019, 10:14
Nerys knew something wasn't right. She wasn't sure if she could feel it or if she could see it, but she just knew. Easily, she climbed into her father's lap and snuggled against his chest, listening to him breathing. "I feel kind of sick," she replied. "My belly hurts."

Too soon after her last phrase, she said in the tiniest voice that she'd ever used, "When will Mammy be home?" It wasn't that she didn't love her father just as much as she loved her mother, but her mother knew how to make the sick feelings go away.
VKP
Write with me!!

#21723  by TyrellRose
25 Jan 2019, 22:38
His initial reaction was to wrap his arms around her, holding her close. Meiriona had always been better at helping the kids when they were sick, but he could do comfort. Of course, given the situation... Alun breathed in deeply, trying to maintain his emotions. He needed to, especially now.

Then those fateful words came, and Alun felt his throat constrict. "Nerys, sweetheart..." he started, blinking furiously. This was quite possibly the most difficult thing he had ever done. "Mammy... she isn't going to be home tonight..." How was he ever going to explain this to her? She was so small, so innocent... her life would never be the same after this. "She had a bad day at work."
Player Profile
This season, I've RP'ed with: ... you? Send me a pm or a discord message to plot!

#21981  by Peyton
30 Jan 2019, 10:50
Nerys leaned into Alun, taking comfort in his warmth. That was her favorite thing about him- he was always so warm and his hugs felt like what she thought love would feel like if it was an action instead of an emotion. She cuddled in close, but something felt uneasy.

Her small face scrunched up, confused. What did that mean? She didn't like the way her father sounded; he sounded the way she felt before she cried. "Is she okay?" she asked, leaning back to look up at him and trying to figure out why her mother would not be home just because she had a bad day at work. "Does she have to do reports again?"
VKP
Write with me!!

#22411  by TyrellRose
07 Feb 2019, 19:55
Alun sniffled loudly, unable to hold it in. He squeezed his eyes shut, trying not to cry in front of Nerys. "She's not doing reports, pumpkin. Some very bad people did some very bad things at her work, and..." he needed to say it. Just to say it. He could deal with the fallout, he was sure, but he needed to just tell her. "Mammy isn't coming home ever." He used his hand to lift her chin, looking into her eyes, the eyes that reminded her of Meiriona. "Mammy died tonight."
Player Profile
This season, I've RP'ed with: ... you? Send me a pm or a discord message to plot!