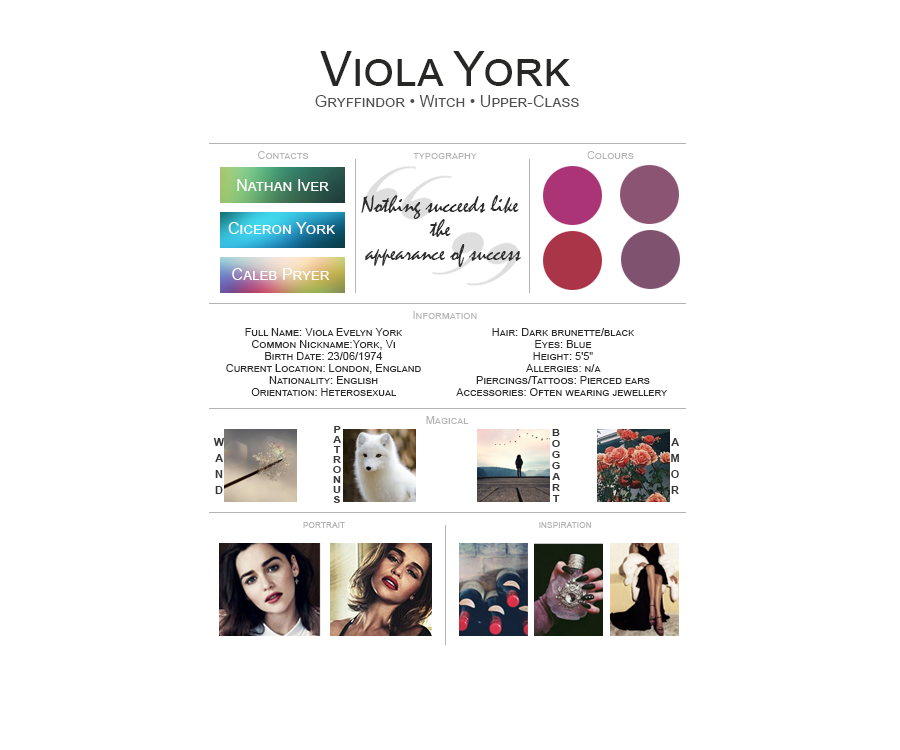 As with the rest of the family, she has the trait of dark brunette hair and lighter blue eyes, only with a heart-shaped face and softer features compared to the usual sharp lines of her cousins. However, even with this, she is determined to stand out in the family, priding herself entirely in appearance by keeping herself impeccably well groomed, wearing only the finest designer clothes and has been known to hire make up and hair professionals before going to an event. Similar to Ciceron, she has a stern, but regular, diet to keep herself slim and 'more attractive' in the eyes of men.

Often found wearing make up, very rarely without, polished nails and wearing heels. She has certainly become the prided figure of appearance in the family and strives to keep it that way, bending to her family's will in what she's to wear at socials and how she is to look to please them.


PERSONALITY
A cold-hearted, superficial woman who knows she's in the perfect position for wealth, stature and a future husband. But in the meantime, is set on causing trouble for everybody in her path.

Currently, Viola is having a wonderful time living the easy life the best she can whilst ultimately giving up her dream of never working a day in her life. She understood that she wouldn't be allowed to get an outrageous 'male' job, but she had never realised how boring it would be to sit in a house alone, especially since she was still waiting for the 'perfect suitor'. It hadn't quite gone to plan since she'd expected to be married with kids in a cushy mansion by now, but instead is working as a tailor at Gladrags, attending York Socials and living up to the highest of appearance standards.

However, despite her sufficiently easy life, like with many of the Yorks, there is a drive for adventure wedged in her mind, meaning that she can't help but feel, not only jealous of the men's freedom, but of the one woman that rebelled and still got everything she wanted, Hera. There's a deep-rooted hatred for her with how easily she seemed to convince her family to allow her to become her passion of a job, and now, Viola strives to out-wit her by being the role-model woman of the family.

Her strongest trait, in her mind, would be her talent of being a good actress, faking her persona to get the best result for her with the smallest room for consequences. That, and her pride and confidence in her physical appearance. For her weakest trait, she is completely aware of how two-faced, cold and arrogant she is; she believes she is entitled to everything and deserves much more than she cares to give.

HISTORY
As a child, she grew up without a care in the world, knowing she could get whatever she wanted as long as she played the angel and remained compliant to the men of the family, quickly picking up how to act around them to refrain their tempers. Being the youngest of two, Viola was spoilt rotten with her brother, Deion, obviously not caring if she never got a job or relied on somebody else for income for the rest of her life.

Originally, she had planned to never work a day in her life, however, with the arrival of Noella in the family when she was almost ready for Hogwarts, her independence was soon forced to develop to take care of herself now that she wasn't the central girl of the family. Although, she soon instinctively took on the role as a big sister, teaching her and comforting her, and creating a sisterly bond of a sort of friendship type that still remains today.

After Noella was born, Viola fell into a sort of independence, realising that she wasn't the centre of the universe, even if she wanted to be. She soon became a strong sister figure, protecting the younger girl as well as becoming strongly knitted as friends. This helped to inspire her to try hard at her grades, and although she didn't get incredible results, she still had enough to get a small job or something more rate-able to her interests. Of course, she didn't get here by having plain sailing; there was always an excuse or an opportunity to be beaten when she acted ignorantly, leading her to develop a two-faced nature in where she would act angelic and compliant to her family to avoid scoldings.

Currently, Viola is working for Nathan Iver, and is improving her abilities in charms, potions, dark arts, and healing dramatically. She believes he is the key to her rising up the ranks to something incredible, and although is dreading ever becoming a mother, she knows it's something she must do in order to climb the social ladder.


CHARMS - adept
★ Cards On The Table • Description: Cast two charms to draw the curtains and throw an object • Completed
★ Failure of Fortunes • Prompt: Gain access to a protected object or area by using a charm • Completed
★

HERBOLOGY - expert
★ Unfortunate Situations • Description: Using cuttings from own-grown plants for a potion • Completed
★ A Little Bit Of everything • Description: Learning about plants' grown only in Romania and their uses • Completed
★
Herbology Expert Essay:
--------