Following her best friend's instructions, Emerson pushed the banner to the right, then to the left, to the right again, a little higher... Until she let out a long frustrated sigh. "Evelyn, if this one isn't perfect it's not the end of the world. You'll have time to plan him at least 80 more birthday parties before you keel over." It was harsh humor, even for them but being able to disregard every filter she had been told to use was why she loved Evelyn so much.

Using her wand the plastered the banner on the wall and jumped off the stool on which she had been standing.

Julien and the boys would join them when the guests were set to arrive. For now, it was only Emerson and the two mothers preparing the last few details. "When is he set to arrive?" She was asking Evelyn when the doorbell rang, leaving Emerson to assume that he was there, judging by the stiff pace her friend used to go open the door.

He was tall and handsome. His wife was beautiful. Emerson kept her eyes on her as the mothers awkwardly welcomed them into Vera's home. They all seemed relieved when Louis defused the tension by asking to be held by his father.

Eventually, Evelyn turned towards her and introduced her to the couple. She eyed Sebastien with disdain and used the fact that he had Louis in his arms as an excuse to not shake his hand.

Emerson took Emily's hand and smiled stiffly as she held it. How the woman had stayed with her husband after his affair with Vera she would never understand.

Soon they were all given tasks and back at work. Sebastien moving the darn banner. Evelyn giving him sharp instructions while probably wishing it fell on his head. Vera was taking care of a fussy Louis. Which left Emerson and Emily to set up a few things in the backyard.

"We should move the table so it will be in the sun," Emerson suggested. 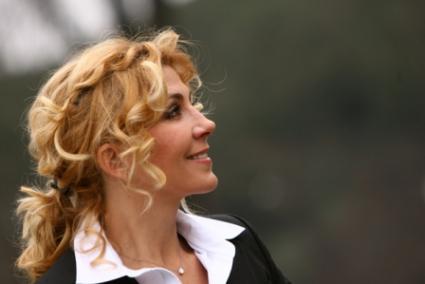 "Why do you always decide right before we're due to leave that you have paperwork you absolutely have to fill out?" Emily growled, stood in the doorway of her husband's office. She despised lateness above most things, and the fact that Sebastien insisted on making them late for everything was something that wound her up. Too many people had asked her why she had insisted on standing by him through everything, and it was times like these that she really wondered the same.

Nonetheless, they had arrived eventually. As Sebastien took Louis, she dropped a kiss onto her step-son's forehead, and then turned, because Evelyn was introducing her to her friend. Emerson was not quite what she had expected for Evelyn's best friend - but then what had she expected? Ignoring the tension, she smiled her wide, typical Emily smile as she shook the other woman's hand enthusiastically. "Louis has told us so much about you." There was barely time for any other comment, being shoved as she was out through the door to take care of outside, along with Emerson.

"It's quite warm," Emily replied to Emerson's comment about moving the table into the sun. "I'm just worried it might be too hot in direct sunlight. Perhaps it would be best to keep it in the shade?"

#12521  by Kay
06 Jul 2018, 09:57
Ah, the eternal conversation about shade or sun. Luckily for everyone raising two opinionated boys had given her a few tricks regarding compromise. "How about half shade and half sun?" She moved her hands towards the spot where she thought the table could be.

#12581  by Cat
07 Jul 2018, 01:31
Emily pressed her lips together, still uncertain about the compromise that Emerson was offering. However, she wasn’t willing to argue about it; standing her ground when working an event was one thing, but doing so at Louis’ birthday party was another.

She nodded her agreement and prepared to move the table.

“Vera tells me you have two boys? What’s that like?”

She leaned her hip against the picnic table as she considered Emily's question. "It's like constant chaos," she admitted earnestly, "but I wouldn't have it any other way." Em sighed contentedly.

#12599  by Cat
07 Jul 2018, 09:17
The blonde chuckled. There was something about Emerson’s playful tone that appealed to her; she didn’t have many female friends she could joke with. Most were too serious. “We’ll go half and half,” she agreed.

Emily nodded at Emerson’s words. “Sebastien and I are considering adoption,” she admitted. “I think it’d be nice for Louis to have a brother.”

"It's good that one of his sets of parents is working on getting him a sibling." The dynamics of their arrangement was quite something. Emerson at times wondered if they considered it to be two sets of parents or three. Was it Emily-Sebastien + Vera-Evelyn or was it Vera-Evelyn + Emily Sebastien +Vera-Sebastien. "I must not always be easy for you. I know it's quite the sentimental gymnastics for Evelyn." That was the perspective Emerson was most familiar with and so she could see how Emily's would be similar and probably even worst considering the betrayal she had suffered.

She nodded at Emerson’s words. “I think Sebastien is still a little reluctant, but he’s moving towards it.” She shrugged nonchalantly. “He’s been more willing to say yes to the things I want since Louis was born.” She giggled, feeling slightly ashamed that she was using it to her advantage. She hoped Emerson wouldn’t judge her! “That sounds awful,” she groaned, covering her face with her hands. “I don’t ask for much,” she insisted. “But this is something I’ve wanted for a while.”

Emerson smiled sadly as the woman spoke, but shook her head vehemently when the woman started judging herself. "Oh no please," Emerson approached the blonde, her hands falling to her side before she was close enough to grab Emily's hands. "Don't feel bad, please. You get to be happy too and if that means asking him to be a little more giving then that is what it is. You are so strong for forgiving them."

#12711  by Cat
08 Jul 2018, 03:08
She was close enough now that Emily could see the little specks of colour in Emerson’s eyes, would be able to reach out and touch her if she wanted to. It didn’t bother Emily that she had noticed that.

“I do have to wonder if I’m being selfish when it comes to children though,” she murmured. She shook her head. Today was not the time for serious conversation. They were there to celebrate her adorable step-son.

“Right, what else needs doing?”

"Selfish how?" Emerson asked in disbelief. "The man had a child with another woman, I don't think that insisting on having a child with him when he's your husband could ever qualify as selfish." And even if it was, she deserved so much for putting up with the other 3.

Maybe the question wasn't how Emily had stayed with him, but rather how the man who had betrayed her could possibly think he still deserved her.

#12785  by Cat
08 Jul 2018, 16:53
"Not selfish when it comes to Sebastien," she disagreed, shaking her head. She glanced down at her hands. "It took months to convince him to be part of Louis' life, and he's his own flesh and blood. How can I adopt children knowing their adopted father would rather not have them?" She shrugged her shoulders. The guilt and the heartache was eating away at her, and as she stood there sharing it with a woman she barely knew, she was beginning to realise just how much everything was bothering her.

Why was it that she was opening up so easily to Emerson about things that she found so difficult to speak to her husband about?

#12862  by Kay
09 Jul 2018, 16:54
Feeling the weight of Emily's admission Emerson's heart ached for the woman she barely knew. Being a mother was the most fulfilling journey she had ever experienced. To think that she could have been with a partner who did not support her through that gift was agonizing. Not to mention that Emerson felt completely angry to find out that Sebastien had to have been convinced to be part of his son's life.

Choosing an approach she usually only used on those she loved most. Emerson took the blonde's hand and looked straight into her eyes. "I am going to ask you a question. You do not have to answer but think about it. Does a man who needs convincing for being involved in his son's life, a man who doesn't seem interested in being involved in his own adoptive children's life deserve the efforts you are putting in this marriage?" Because beyond staying with him after what he had done with Vera there was this. And to Emerson, those were two unforgivable flaws.

#12958  by Cat
10 Jul 2018, 13:23
Albeit surprised at her own admission, Emily was shocked that Emerson was so candid in questioning her about her marriage. Whilst many had called her out for staying with him, few had had the courage to ask her how she felt about this. To ask her if this was really worth it. The truth was, she couldn't encourage him to want children just as much as he could not sway her. Perhaps they were, in fact, at a crossroads that they would never be able to come back from.

Emerson's intense look and hand upon hers made Emily feel strange. It wasn't uncomfortable, but perhaps that was the problem; she was confused as to why she felt so relaxed in Emerson's presence. Realising what a pretty colour Emerson's eyes were made her gulp. She couldn't help but wonder if this had been how Sebastien had felt, the first time he set eyes on Vera. But no, Emerson was a woman, and Emily well... she didn't like women that way.

#13003  by Kay
10 Jul 2018, 18:13
There was a sort of tension between them. Emerson didn't know how to describe it, it didn't feel like conflict, but it was as consuming. It hit her right in the chest when they were holding hands and their eyes connected.

It took her a second to recover when Emily broke contact and started busying herself. Eventually, she followed suit using her wand as she blew the blue and yellow balloons. "Did you parents ever throw parties for you when you were a child?" She asked, attempting to move on to a lighter topic.