And it is from this world of darkness
Which come the evil, destructive forces of man's nature


My heart is breaking but there's no use crying
What a cyanide surprise you have left for my eyes
→ P E O P L E O F I M P O R T A N C E
Don't mind us we're just spilling our guts
If this is love I don't wanna be loved
→ A P P E A R A N C E
You could be the corpse and I could be the killer
If I could be the devil, you could be the sinner
→ P E R S O N A L I T Y

:Reason for being turned:
Captured by the white monkeys and held captive, he was forced to Drink his sires blood. The idea of turning him was the same reason for turning his childhood schoolmate Genesis Batsu: To use them to kill their family's. Only they had learned from Gen's killing of his own sire and instead kept him captive in an attempt to brainwash him; being trained not to give in to torture they underestimated their enemy and when he was rescued he made it his goal to hunt them down instead.

Bloodline: Fleur du Sang
Status: Going after the coven of his own bloodline known as the 'White monkeys'

Bloodline Abilities: Thought Perception
:Notes:
-Having honed his skills in this during the six years of his captivity, he uses this skill, for the most part, to get into his boy's heads as well as to play around with his prey during torture sessions.

-While he's got more control then most new vampires he does still slip from time to time and see's things he doesn't mean to, and into people, he's not aiming to get into. He's usually silent about this mishap, keeping it to himself.

Basic Ability #1: Increased Speed
:Notes:
-Known for his quick action before, him inheriting this trait did no one any real favors as he now has even more of a speed advantage and doesn't need to use magic to get his point across.

-Sometimes forgets that the Ministry would rather them not use this trait and uses it anyway.

Basic Ability #2: Enhanced Senses
;Notes;
-Takes advantage of the ability to eavesdrop on his prey or track their scent. Will use this trait when hunting for his current meal as well. 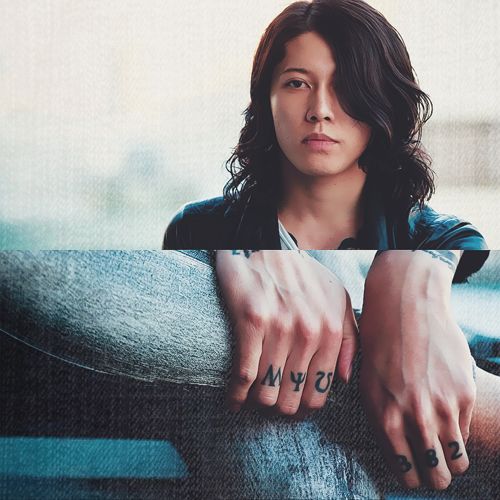 Details:
Not yet able to use magic outside of school his father found this a bit tricky, however, he got Yoru onto the forbidden books before he even entered school. By the time Yoru entered school and was finally able to pick up his wand, he already basically knew all the spells that could land one in prison. He lost the ability to use this knowledge after he was forced to turn into a vampire in the summer of 1996.

Note: He had never actually used most of them, preferring to kill with blood involved rather than alert the ministry to his ever-growing records of murders. He was known to use crucio and once in awhile the Imperius curse when torturing his prey in protected rooms.

Trained in killing, his father was also aware the ability to defend yourself was also important. Needless to say he worked with his son on both, and Yoru again lost the ability to even use it once he had been turned into a vampire.

Note: When alive he was seen often using these spells when in the middle of a fight.

Details:
A master of offensive and defensive skills, Yoru knows his way around a blade to the point of being deadly with even a switch blade. His father got him into Kendo and Fencing training along with training with the dark arts around 4 years old, lessons continuing up until his death. His trenchcoat even has a large pocket that holds one when he exits the house. He continues his training knowing even the best master has someone in the world that is that much better.

Details:
The Yakuza coming from the age of the samurai it was and is a tradition for all members to learn the way of the sword. Yoru was no exception, while Kendo has some likeness to it for them Kenjutsu is in a league of its own.

That being said, it's a known fact that one never stops learning it and their swords are treated with just as much care as their hearts because to them their sword is their heart.

Details: Also coming from back in the day samurai, Jujutsu is taught to all major players of the group and Yoru started the basics as soon as he could walk. The art its self is used to manipulating the opponent's force against themselves rather than confronting it with one's own force. Typically used when no weapon is at hand he prefers to use his blade more so than his body, but if pushed to do so will use this training to get the upper hand.

Details:
Just as the samurai's had their swords taken away, the Yakuza also had to update their weapons. While they prefer magic as opposed to their swords and guns, as vampires became a common threat in his father's age (before the white monkeys made it center stage) all members were trained in using a gun as well as the skills they learned for the sake of tradition. Yoru picked up his first gun at the age of 8, learning how to hit his mark by the age of 15. It was years later they became aware this would only injure said vampire...not kill them.
中村夜
-Rule by fear-
-Bond through respect-
-Keep your feelings out of it-
-Nakamura-shi Yakuza for life-

of crimes
1977
Eiji Kudo-June 13th 1977
Reason: Member of the Nakamura-shi Yakuza it was found out he was leaking information to another opposing yakuza family.

Hajime Yamado- Aug 1st 1977
Reason: Yoru took this one in his own hands when the man drug his father's name into the dirt.


1978
-Notes-
-White monkeys first appear as a threat. The siring of the original white monkeys vampire not yet happened

-Most of these done with the assist of

Kiro Abe - Aug 14th 1978
Reason: Captured by his father, the two tortured and killed him together. reason being for disobediance within the group.

Moshi Hashimoto- Aug 1st 1979
Reason: Attacking fellow members when a deul was not in progress

Accounts:
Temp partner appointed by his father on the Higarashi Jewel co' account.


-Still in process of editing