Profiles of characters with first names that start with B - C.
Reply 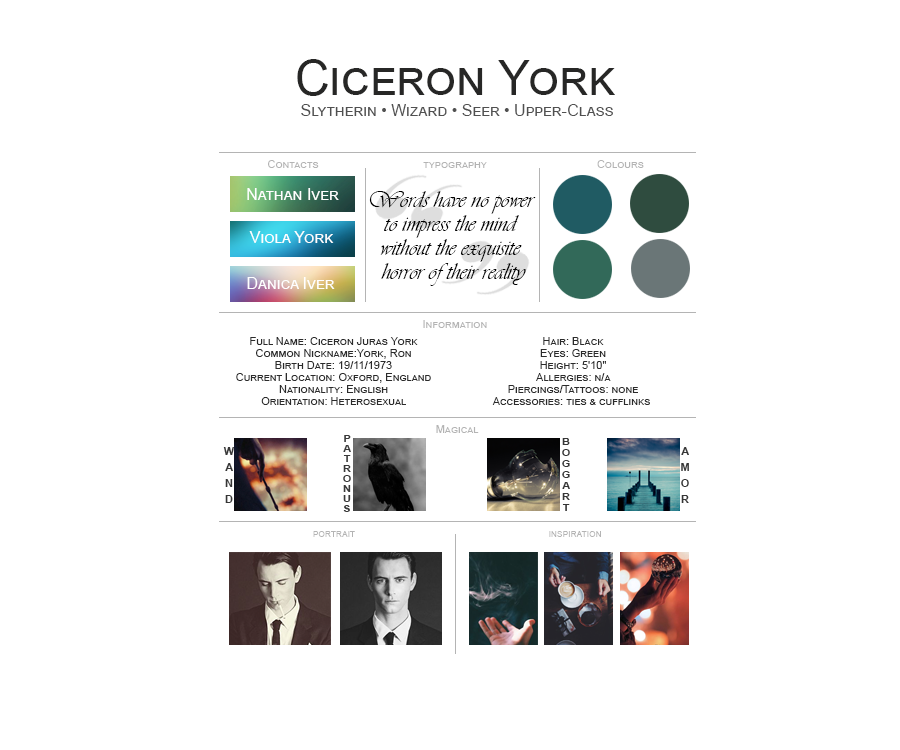 Ciceron is an upper class wizard, believing that he is the centre of the universe and deserves full respect despite hardly earning it. He's cruel and isn't afraid to be blunt about his opinion. Being cold and reserved, he purposely goes out of his way to cause drama between people's relationships and tear down their confidence for his own gain in the long run; no matter who he affects, if there's personal advancement, he'll do it.

Not having many close friends, Ciceron is a loner, possibly because of his somewhat noticeable coldness towards his friends who soon seem to leave him to gain positive comments rather than Ciceron's negativity. Even so, with the friends he's actually able to keep, he tends to lead and pick and choose when to spend time with them, often blowing them off if a better offer comes up.

Recently, he has made a dramatic change in his past ways, attempting to earn respect and dignity in which he has lost. Though, he has also found a new hatred for his boss, disliking the favouritism among the employees. Despite this, he has decided not to act out in revenge, and rather stand out for his brilliant mind.


HISTORY
Ciceron grew up in a moderately sized family, being the youngest and the most spoilt of the three, he expects to be treated like he's the best, even from a young age. He got his way in nearly all situations, getting out of doing chores or activities with the family, mainly because he was labelled as the 'gifted child' for his quick intuition and ability to pick up information quickly.

He soon discovered that he had the possibility of being a Seer, inherited from his uncle, which of course with his apparent luck, it became reality. Unlike his brother and sister, Ciceron is able to put little effort into bonds with his parents to get what he wants, similar to how he was as a child. He put on tantrums and even blackmailed people to get his own way, and even though he doesn't tantrum now, he's still spoilt and classed as the gifted child.

Ciceron discovered the potential of his Seer abilities when he predicted the death of his cousin, and although he saw it, he was too late to tell anybody. Despite being extremely cold, he feels remorse for not being there in time to warn somebody, and although he gained it in personal experience, he refuses to speak of it to anybody.

OCCLUMENS - ability • Achieved
Level of ability: Extremely talented
Reason why your character chose to learn Occlumency: With his boss as a Legilimens, and his secrets growing, Ciceron is having to expand his talents to protect himself from harm
Age: 27
Profession: Chief Accountant, Cleary Co.
Threads:
★ Failure of Fortunes • Prompt: Doing research on how to become an Occlumens • Completed
★ Cards On The Table • Prompt: An attempt at bluffing or keeping someone from perceiving your thoughts • Completed

LEGILIMENS - ability • Achieved via Reward
Level of ability: Experienced
Reason why your character chose to learn Legilimency: Ciceron is starting to work more in the underworld, and with so many contacts and possible betrayals, he is wanting additional methods to spot the rats
Age: 27
Profession: Chief Accountant, Cleary Co.
Threads:
★ Prompt: Doing research on how to become a Legilimens
★ Prompt: A failed attempt at using legilimency for the first time
★ Prompt: First successful attempt at using legilimency