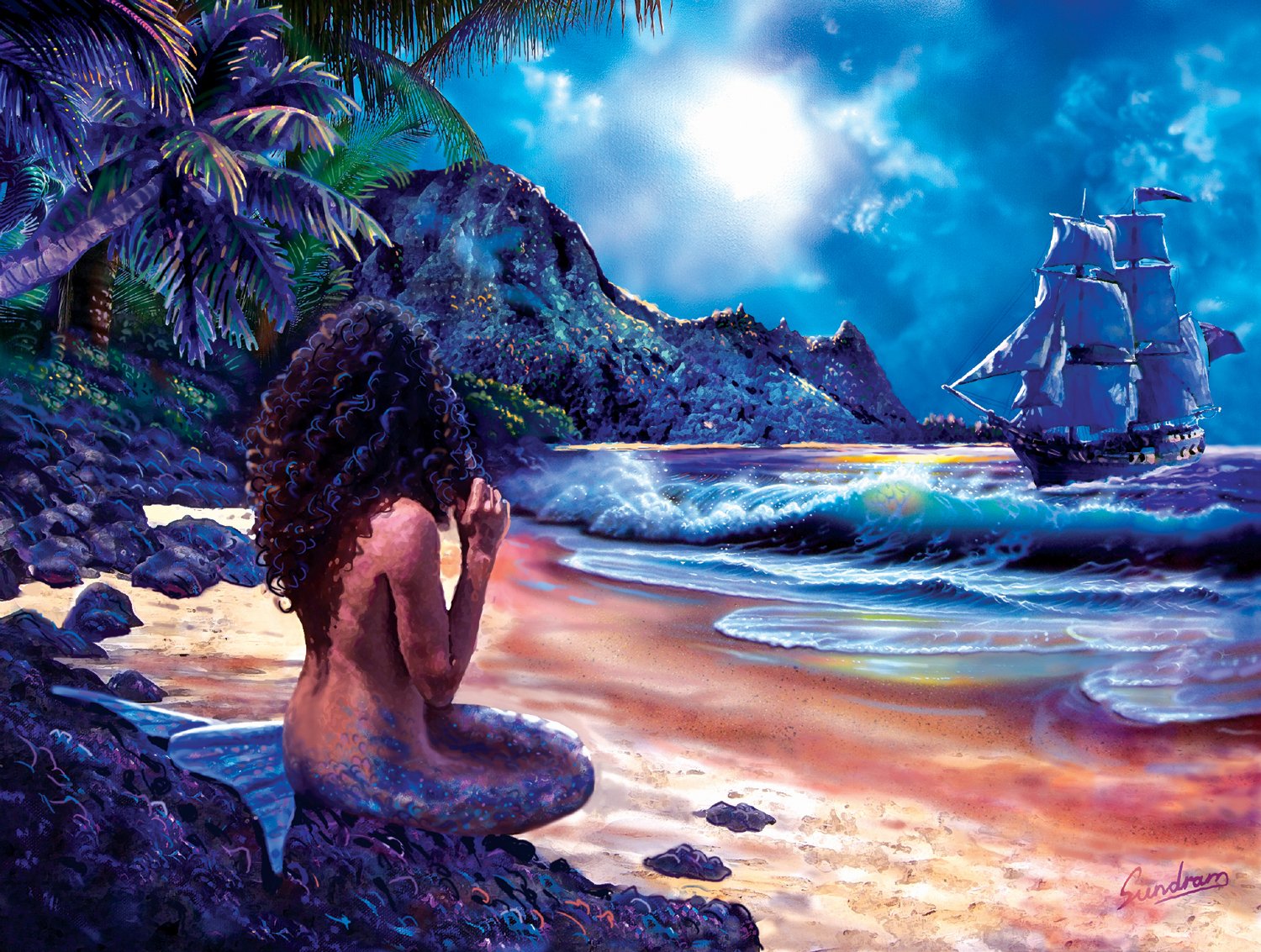 Nimiah watched from afar, hidden behind a rocky cove that had been thawed out by weathering and explorers. Her eyes were wide with both fear and wonder at the sights, her fingers pressing into the rock. A particularly loud crash came from the scene, causing Nim to duck below water for a moment, peeping back up so only the top of her head and dark brown eyes were visible above the surface. Curious, she dipped below the waters rim again, using her glossy tail to propel her forwards to another alcove to get a better look.

Ahead were two ships; one had plunged itself into the other, and used planks to board. The beings on board pointed sticks at each other, throwing green bursts of light toward the others; one group seemed to be wearing rags, and the others seemed to be donned in gold and navy uniforms. In front of her eyes, she watched bodies fall from light itself, some crashing into the water.

Once again, she dipped below the surface, and watched the far off creatures sink lower, lifeless and still. Nim had heard stories of these humans. They were able to command the world around them with sticks, and Nimiah needed to know how. Tentatively, she began to near, hearing the yells and screams. Afraid she'd be seen, she once again retreated underwater, nearing ever closer to the brawl on the ships.
"Be a seeker of everyday magic"

#18146  by deraforia
24 Sep 2018, 18:23
Thunder cracked as the mast of the battered ship split in two, showering seaman in splinters that would blind them if they did not take care. Obi shielded his eyes with the wand in his left hand, not daring to lose sight of the Captain in blue and gold. The ship was dead in the water, and still the bastard fought on.

"Lay down your wands!" Obi shouted at the uniformed men. "And maybe you won't join your brothers in the water!"

More flashes of green danced after him, and he danced with them, dodging spells just as quick as he could sling his own back at the others. What he could not dodge was the sudden explosion of gunpowder beneath his feet, launching him away from the now swiftly sinking wreck of a ship and into the cold Caribbean water.

#18204  by Vyreia
25 Sep 2018, 03:36
Nim watched from beneath the waves, her fingers twisting the pearls at her neck nervously. This was all so exciting and curious, and yet there was a sick feeling at the pit of he stomach. She furrowed her brows, squinting as she swam closer, trying to make out what was happening. In an instant, her eyes were widening, and she veered down and to the left, narrowly missing the slap of a wooden plank on the surface of the ocean. Pushing her dark curls out of her face, she witnessed a sudden burst of flames from the deck.

The glow of red and orange mesmerized her for a moment; it was something she had never laid eyes on before, and the world of muffled screaming and shouting seemed to disappear. That was until something caught the corner of her eye. Nimiah snapped to look at the figure, seeing one of the men that had been on the ship a mere moment before now slowly sinking into the depths.

She stared for a moment. She had never even interacted with these creatures before - how was she sure they couldn't breathe down here? Sure she had never seen them in the water before, but why else would they travel on wooden vessels to just...fight and risk their lives? She bit her lips, thinking for a moment before finally plunging downward, toward the man, gripping him by the wrist and attempting t drag him up to the surface.
"Be a seeker of everyday magic"

#18793  by deraforia
02 Oct 2018, 23:39
Heat. Cold. Light. Darkness. The pirate's seemingly last moments each contradicted the last. One moment he was flying, the next he was falling, floating, sinking. The realm of sleep claimed him.

But he awoke once more as the water broke around him and he managed to swallow a hungry gasp of air. Smoke filled the skies, the burning of man and ship filling his nose. Why was he here? He should have been consigned to the depths.

He noticed then that he was not alone. It was not his own limbs keeping him afloat, but another, a woman.

"Who are you?" he suddenly demanded of his savior. "Where did you come from?"

#18806  by Vyreia
03 Oct 2018, 03:04
Nim gripped him by the ripped shirt, hoping to keep him afloat - she was not particularly strong on her upper body; all her power was in her tail, and currently it was doing a lot of work to keep them both above the water's surface. As he spoke, she was glancing around, looking for the nearest area. She considered taking him back to the ship, but another glance there proved it was otherwise incapacitated. Her cove would have to do.

"Nim." She said, though...it came out as a little screechy above the water. Where was she from? Wasn't it obvious? Though, maybe he meant more general...she did not understand humans. "Water." She screeched again.

She began to drag him through the current toward the cove, straining a little at a particularly harsh wave.

"What is your name?" She tried to ask, hoping the situation would prompt answers.
"Be a seeker of everyday magic"